Once again Lasswade AC athletes were out in force for the 2019 Scottish Athletics National Track and Field Championships. The events, held over three summer weekends at Grangemouth Stadium, bring together the best of the current, and emerging, crop of talented athletes from around Scotland and beyond. 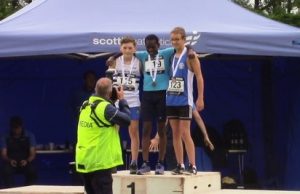 One of the stars of this year’s Championships was U13 sprinter Shane Majekodunmi, taking home the gold medal in both the 100m and 200m. The final of the 100m saw the top three ranked U13 100m sprinters in the country go head to head in what was a classic race. Producing a massive personal best Shane took top spot, in a time of 12.89s, fractions ahead of Edinburgh AC’s Cameron Gettinby and Shetland AC’s Archie Irvine. Having qualified second fastest for the 200m final, Shane stepped it up for the final winning in another personal best time of 26.71s. Once again second place went to Edinburgh runner Cameron Gettinby in a time of 27.01s.

Also in action for the U13’s was Ramsay Blair. Despite missing out on qualification for the final of the 100m, Ramsay produced a new personal best time of 14.69s in his heat. In the javelin, Ramsay narrowly missed out on the medals with a final throw of 24.58m leaving him in fourth place.

Moving up the age groups into the U15s, jumper Kate Harvie came away with a gold and bronze medal. Kate’s clearance of 1.59m was good enough to take the gold in the High Jump ahead of VP Glasgows Jenna Hildith who took silver with a clearance of 1.57m. In the triple jump Kate took bronze with her second round jump of 10.69m. Libby White of Ayr Seaforth took the gold with a jump of 11.08m, narrowly edging out Holly Kirkwood, VP Glasgow, who took silver with a jump of 11.04m. 2018 National U13 High Jump Champion Matthew Tait, moving up to the U15s for this years event, finished in sixth place with a jump of 1.54m. On the track Olivia Meikle finished her 1500m heat in 7th in a time of 5.33.88s, while Amy McLaughlin came home 6th in her 800m heat in a time of 2.38.42s. 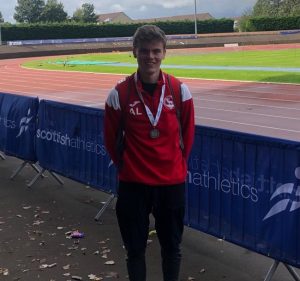 There were further medals for Lasswade AC athletes in the U17 Championships. Afterspending much of the previous year recovering from injury Adam Leighton is starting to get back to his best. His jump of 1.77m saw him take the silver medal, behind Pitreavie’s Sam Turnbull. 2018 champion Michelle Blaikie missed out on the medals in the narrowest of margins, finishing in 4th place, on countback, with a jump of 1.57m. Another Silver medal went to Imogen Lewis in the U17s Triple Jump with a  first round jump of 10.95m. Winner on the day was Edinburgh AC’s Ellie O’Hara with a jump of 12.27m. Imogen and Ellie had gone head to head the previous weekend, stepping up an age group to compete in the U20’s Triple Jump. The result had been the same that time around with Imogen taking silver and Ellie Gold.

It was a case of so near yet so far for U17 runner Elena Clark, despite fantastic performances, in both the 100m and 80m Hurdles. In the 100m heats Elena finished in a time of 13.11s, leaving her one place and a mere 5 hundredths of a second outside of qualifying for the final. In the 80m Hurdles Elena did manage to qualify for the final, only to narrowly miss out on a medal finishing in fourth place overall with a time of 12.33s. Megan McLaughlin was also in action in the U17’s discus, finishing with a throw of 17.72m. 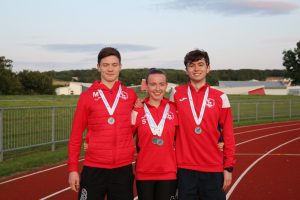 After winning Gold in the U20 men’s 1500m last year, Matthew Smith moved up to the senior age group this year and once again came home with a medal. Having come through the heats to qualify for the final, Matthew finished a close fought final second, in a time of 4.00.47, to take silver. First place went to Michael Ferguson, of Aberdeen AC, just ahead in a time of 3.59.52s. Among the other seniors in action, Greg Louden qualified for the final of the 800m, with fellow Lasswade runner Cameron Steven narrowly missing out. Euan Hood ran a new personal best to qualify for the final of the 400m. Amy Frankland ran a new personal best time of 17.42.74 to finish 8th overall in the women’s 5000m, while Christian Graham finished his 5000m fourth in a time of 15.34.25s.

Another big performer at this years Championships was Stephen Park, a regular of the Lasswade AC Men’s League Team. Competing in the Masters event, Stephen took 3rd in the 100m, in a time of 11.62s. He then went one better to finish 2nd in the 200m, finishing in 23.17s behind Central runner Ian Horsborough. The Lasswade AC Men’s League team will be back in action this weekend, with a strong chance of winning promotion back to Division One.