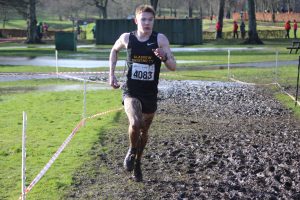 Magnus with a great run to finish in 9th place! (Photo courtesy Will Graham)

The National Cross Country Championships once again took place at Callender Park, Falkirk. There was some doubt that the championships would go ahead at this venue due to the recent adverse weather and the condition of the park. However, after agreement that  some parts of the park would not be used and a revised course the event got the go ahead. That having been said the ground was saturated and extremely muddy in large sections of the course, the forecast for the day was wind, sleet and rain.

Lasswade AC had total of 28 athletes running and the first event of the day was the u13 girls.  The conditions deteriorated and the sleet and rain came down as the race got underway. The first Lasswade girl home was Hannah Knipe in 28th followed by team mate Eloise Scott in 50th and Bethan Kitchin in 62nd. Unfortunately Abbie Foster did not finish as she had a fall after being tripped by another runner who slipped in the muddy conditions. 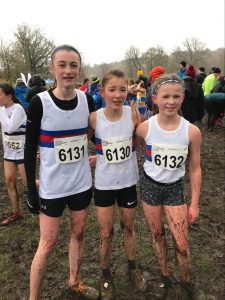 Our U13 Girls at the end of their race! (Photo – courtesy of Graham Knipe)

The cold and wet conditions continued for the u13 boys race. Andrew McWilliams who has been improving throughout the winter was first Lasswade runner home in an impressive 7th place with team mate Rowan Taylor having a strong run in 26th and Cian Murray  completing our u13’s in 144th place.

In our u15 girls team Olivia Meikle led the girls home with a solid performance in 33rd, Amy McLaughlin was next home in 46th followed by team mate Skye Foster in 92nd, Fiona Eades 95th and Rebekah Knipe 102nd.

We had five u15 boys in the next race and the conditions remained cold, wet and very muddy! Sam Kitchin led the boys home in 58th, Alastair Scott was next in 65th, Rory Scott was 82nd, Alasdair Brown 111th and Alec Miller 141st.

Harry Henriksen last year’s u15 National Champion had moved up an age group to u17. Preparation for Harry  had not gone to plan but he was on the start line with team mate Alex Porteous ready to give the race a go. Harry ran a steady race to finish in 23rd place, team mate Alex had to pull out.

In the u20 men we had two runners competing for their respective universities, Christian Graham running for Dundee and Magnus Tait for Glasgow. Both probably had their best races of the season with Christian following just behind the lead group of 6 or 7 runners on the first lap and Magnus a litte further back in about 15th. In the second lap both worked their way through with Christian finishing 4th and helping his Dundee University team to win the silver team medal. Magnus also worked his way through to finish inside the top 10 in 9th place. 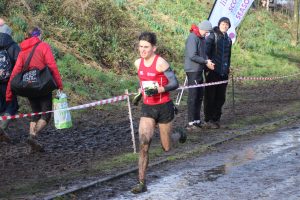 Christian on route to a brilliant 4th place! (Photo courtesy Will Graham)

In the u20 women’s race we had one athlete, Sarah Tait. Like Christian and Magnus, Sarah also had one of her best races of the winter season. Sarah was up in as high as 5th place going into the second lap but faded a little still finishing inside the top 10 in a super 8th place. 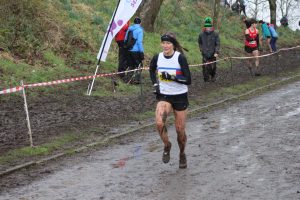 Sarah on her way to superb 8th place! (Photo courtesy Will Graham)

Keira Gore was our only senior lady competing today and considering she wasn’t feeling that great going into the race ran very well to finish in an impressive 19th place.

The last race of the day was the senior men and it got underway just as the heavens opened once again with sleet rain and wind. The course started off the day like a quagmire of mud so after nine races you can imagine what it was like for the men! All of our men that were competing are masters and Andrew McGlone was first home in 314th, followed by Scott Dickson in 437th, Dave Scott and Peter Ness were pretty close with Dave coming out on top in 456th with Peter in 467th. Our final two runners were Steve Brown 501st and Phil Parr-Burman in 580th

Well done to everyone who took part today.  A great effort with some impressive performances in very difficult conditions.

That’s the cross country season almost over for another season, just the schools and inter counties left. If you are involved in these then good luck we hope you have a great race.

Thanks to everyone for their help and support over the winter as always we greatly appreciate it –  it’s great to see everyone pulling together and mucking in to help and support each other – so thank you all.

This entry was posted in Cross Country, News and Info, Uncategorized. Bookmark the permalink.