The first East District Cross Country League Match of this winter season took place at Stirling Unversity on Saturday 21 October 2017. Initially the weather was mild and dry but the forecast was for rain and it was not too long before it arrived making the course, which was already fairly soft and wet, very heavy and muddy in sections.

Lasswade AC had a great turn out for the first match of the season with 34 runners taking part. The under 15 boys, under 15/17 girls and senior men were the only age groups where we had incomplete teams.

The first race of the day was the under 11 girls and it was fantastic to see Lasswade AC fielding six athletes with two finishing in the top 10, Hannah Knipe 7th and Hannah Harley 10th.  Team mates Abbie Foster and Eloise Scott were next home in a very close finish in 24th and 25th, Sophie Birse was  58th and Amy Rutherford 69th.

The under 11 boys were next race off with three Lasswade AC athletes taking part. Andrew McWilliam led the field and the Lasswade boys home to win by six seconds. He was followed by Harry Miller in 30th and Jude Anderson 44th.

The under 13 boys was the next race to get underway and we had five boys in the field. First home for Lasswade was Ross Wolfenden finishing in 18th. He was followed home by team mates Dexter Howard 31st, Cameron Chambers 47th, Alex Miller 50th and Alistair Scott 78th.

In the under 15/17 girls Abby McGlone was first Lasswade athlete home in 28th followed by team mate Lauren Meikle 52nd.  Lasswade runner Harry Henriksen under 13 national cross country champion from last season moved up an age group to under 15  and started off this season where he left off last season with a win. Team mate Cameron Dickson finished in 53rd.

The weather conditions weren’t getting any better but next to set off were the under 17 men and we had three runners. Christian Graham set off with clear intent and had a good lead going into the second lap and finished with a comfortable 50 second advantage  and was Lasswade’s third winner of the day! Team mates Euan Hood and Daniel Kelly were 18th and 28th respctively. 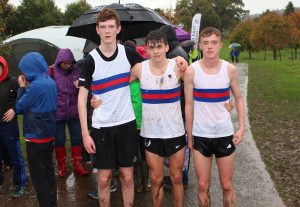 The womens race was already underway and it was great to see Keira Murray (Gore) injury free and running again and leading our ladies team home finishing in 14th. Keira was followed home by team mates U20 Ailsa Innes 46th and Cathy Dickson 56th. It was great to have a complete ladies team!

The final race of the day was the men with a field of nearly 300 runners. The rain had stopped but the damage to the course was already done and some parts were now extremely muddy and very slippy.  Martin Gore, like his wife Keira, had missed all of last season through injury so it was great to see him running again. Martin led the team home finishing 69th. he was followed by U20 Jamie darling who finished 122nd, Andrew McGlone 137th, Dave Scott 195th and Graham Knipe 236th.

It was a fantastic day and it was really great to see so many athletes coming out and supporting the club in these difficult conditions.

Congratulations to everyone on their individual performances and thank you for your support.