The final match of this winter season’s East District Cross Country League took place on Saturday 20 January at a snow covered course in Broxburn. It was a beautiful day and the weather conditions for running were perfect although the snow made it more difficult over some parts of the course. There was a large contingent of Lasswade athletes with complete teams in all age groups with the exception of u15 boys and u15/17 girls.

The first race of the day was the under 11 girls and Lasswade AC fielded four athletes with Hannah Harley the first Lasswade athlete home finishing in an impressive 7th place with Abby Foster 9th, Eloise Scott 40th and Ava Inglis in her first cross country finished 61st. The girls finished 4th in the league for the season.

The under 11 boys had three Lasswade AC athletes taking part.  Andrew McWilliam was first Lasswade finisher in 9th place.  Harry Miller was next counter in 69th with Hayden Whitlie in 74th.

In the under 13 boys we had six boys in the field. First home for Lasswade was Dexter Howard in 47th. He was followed home by team mates Cameron Chambers 53rd, Alistair Scott 56th, Matthew Cartledge 60th, Alastair Brown 63rd and Alex Miller 72nd.

In the under 15/17 girls Sarah Tait (u17) continued her improving season finishing 4th overall and 1st u17.  Team mate Abby McGlone (u15) was next Lasswade athlete home finishing 32nd overall and 23rd u15.

Harry Henriksen was our only runner in the u15 boys race yesterday. In a group of three athletes as he came round at the end of the first lap he had opened up a clear lead by the end of the second lap making it all look so easy with a comfortable win.

In the under 17 men we had four runners. We were in no doubt that Christian Graham who had won the previous two matches this winter comfortably was going to make this a hat-trick of wins in the league and he did not disappoint. Another athlete that makes it look so easy! It was great to see team mate Magnus Tait in his first appearance in the league this season finishing 3rd with team mate Euan Hood finishing 17th and Daniel Kelly 23rd. The boys were 1st team on the day and 2nd in the league for the season. 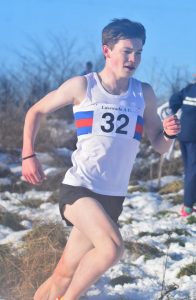 Magnus Tait with a strong run at Broxburn

We had a complete ladies team for the first time this season and there were some great performances with Lauren Dickson leading the Lasswade ladies home finishing 6th overall and 2nd u20. It was also nice to see Keira Murray (Gore) with a strong run finishing 12th and the fast finishing Cathy Dickson in 60th. 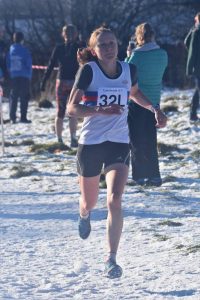 Keira Murray in action at Broxburn

For the final race of the day and season for the league it was the turn of the men. We had seven Lasswade athletes competing and first home was Scott Thomson in a very respectable 20th , he was followed home by Jamie Darling (U20) in 94th, Andrew McGlone 108th, Dave Scott 162nd, Scott Dickson 183rd, Phil Parr-Burnham 210th and Graham Knipe 227th.

(All photo’s courtesy of Neil Renton)

If you look at the results today and over the course of the season it is clear that we do have age group teams with the ability to win the league, unfortunately it is just circumstances in terms of availablity and/or injury that have proved our undoing. Having said that we there were lots of fine performaces over the season in all age groups and the numbers competing particularly in the younger age groups (u11 and u13) have been higher than recent years which is really positive for the future.

Thanks to everyone for their support over the course of the season and congratulations to you all on your own individual performances.

Roll on the National!