The East District Cross Country championships took place today at Balgownie Playing fields in Aberdeen. It was a cold and windy day but otherwise the conditions for running were good.

As always with Aberdeen the numbers competing drop off and our numbers were further depleted with six call offs due to injury or illness.

In the first race of the day, the U13 girls, we had two athletes competing, Amy McLaughlin and Skye Foster who both ran well to finish 24th and 26th place respectively.

In the U13 boys we also had two athletes running, Alasdair Brown and Cameron Chambers who both  ran strongly to finish 28th and 37th place.

We had no U15 girls competing today but the U15 boys race produced the highlight of the day for Lasswade where Harry Henriksen showed his class and a clean pair of heels to the rest of the field to win. 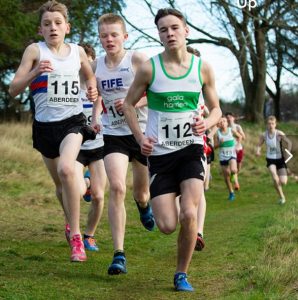 We had no U17 athletes competing either boys or girls.

Sarah Tait continued her good form this season to finish in 6th place in the U20 women’s race. In the U20 men’s race Sarah’s brother Magnus also ran very well to match his sister also finishing 6th.

In senior women’s race we had two athletes Keira Gore who had a strong run to finish just outside the top 10 in 12th place and team mate Rachel Fagan also ran well to finish 41st.

The final race of the day was the Senior Men’s race and we had four athletes with Martin Gore having a solid run to lead the team home in 45th place, next home was Andrew McGlone in 102nd, Stephen Brown in 153rd with Derrick Brydon coming home in 169th to complete the team.