This is fantastic news and a very well deserved honour. Many congratulations to Barbara from everyone at Lasswade AC.

I have taken the information below from the Scottish athletics website. 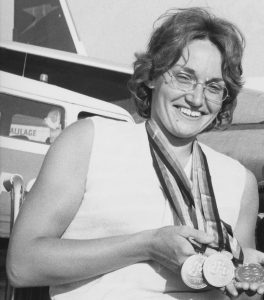 Barbara Howie made a major impact in her first Paralympic Games in Heidelberg, West Germany in 1972 where she set a world record and won three gold medals – 60m wheelchair, 4×40 Open and slalom 3.

She is Scotland’s most successful wheelchair track athletics Paralympian.

Barbara just missed out on all the technological changes that made such an impact on athletics in the years after she retired.

She continued her involvement in athletics in Scotland as an Official and was regularly present at major meets. Her major competition as an Official was the Commonwealth Games in 1986 in Edinburgh.

This entry was posted in News and Info, Track and Field, Uncategorized. Bookmark the permalink.