The first of this seasons East District Cross Country league matches took place at Stirling on 19/10/2019. It looked like being a miserable day with heavy rain overnight and on the morning on the day of the event.  However, the skies cleared and although underfoot conditions on parts of the course were very heavy and muddy the day itself was dry, sunny and mild.

In the first race of the day the under 11 girls we had our new Australian members running. Twin girls Ruby and Poppy ran great races to get the club off to a flying start finishing 2nd and 8th respectively. In the under 11 boys we only had one runner, Nathan Lawrence who ran strongly to finish in 44th place.

We had four under 13 girls running in the next race with Abbie Foster leading our girls home in 12th place, followed by Hannah Knipe in 17th, Eloise Scott in 25th and Bethan Kitchin 44th. This put the girls in 5th place in the league team event only four points behind 3rd place.

In the under 13 boys our first runner home was RowanTaylor in 8th place closely followed by Andrew McWilliam in 9th place. Our third counter was Cian Murray in 70th. The boys are currently sitting in 6th place in the league.

Under 15/17 girls run together in the league and we had five athletes in this race. Leading Lasswade home was Olivia Meikle in 21st, followed by Amy McLaughlin 37th, Abby McGlone 39th, Sky Foster 69th and Rebekah Knipe 75th.

Next up were the under 15 boys and Alastair Scott ran well to lead our team home in 31st, closely followed by Sam Kitchin in 33rd and Alasdair Brown running well after having tonsillitis to finish 49th.

In the under 17 men we only had on runner, Alex Porteous who had a solid run to finish in 22nd place.

Only the senior races left and the women were off first with only two Lasswade athletes which was a bit disappointing after having eight ladies at the relays a week earlier. Sarah Tait was up with the leaders from the start and had a good run to finish in 3rd place with the consistent Rachel Fagan our second counter in 47th place.

The final race of the day was the men and Lasswade had eight runners! Leading our men hom was Christian Graham who recovered after an early fall in the slippy conditions to finish 18th (5th U20), not too far behind was Magnus Tait in 24th (10th U20), Andrew McGlone was next counter in 132nd, followed by Scott Dickson 160th, close behind was Steve Brown in 166th, Dave Scott 207th, Phil Parr-Burnam 239th and Derrick Brydon 242nd. 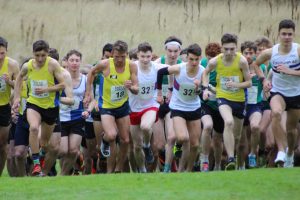 Magnus and Christian alongside Andy Butchart at the start of the Men’s race.

The first league match is always a difficult race to get complete teams as it falls in the October school week so although there were some incomplete teams it was good to see so many athletes competing.

Thanks to everyone for your efforts and congratulations to you all on your performances!

(NB:Phot0 Courtesy of Will Graham)