Saturday 23/02/2019 – The National Cross Country Championships were once again held at Callendar Park in Falkirk. The recent weather conditions meant that the course was in great condition with not too much mud on a very spring like mild February day – very unlike a typical Scottish cross country race.

Lasswade had teams in most of the male age groups with the exception of the U17 boys but unfortunately only one complete team in all of the female age groups.

The first race of the day was the under 13 girls with a field of almost 150 runners.  Olivia Meikle led the team home with a strong run to finish in 27th, Hannah Knipe in her first championship race was next in 35th followed by Amy McLaughlan in 50th and Skye Foster finishing in 113th to complete the team.

In the under 13 boys we had five runners with Sam Kitchin our first finisher in 32nd, closely followed by team mate Andrew McWilliam in 33rd, Alasdair Brown was next home in 71st with Alec Miller our fourth counter in 125th and Shane Majekodunmi  completed the team finishing in 135th

We knew we had our best chance of an individual medal in the under 15 boys race and were quietly confident that Harry Henriksen would be in the mix at the sharp end of the field. Harry did not disappoint amongst the leaders from the start he began to move clear of the group around the half way point stretching his lead on some of the small hills. Harry had a reasonable lead coming down the finishing straight but had no time to relax as the runners behind began sprinting as they fought it out for silver and bronze medals. A fine win and second national cross country title for Harry having won the under 13 boys in 2017. Next home for Lasswade was Alex Porteous in 83rd, Alastair Scott 110th, Jamie Lawlor 122nd and Jonathan Adams 141st. 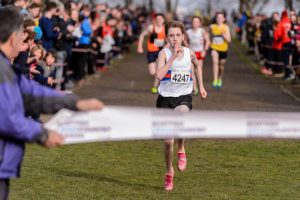 Abby McGlone was one of our few female runners and was flying solo in the U17 girls. Abby had a solid race to finish in 32nd place.

In the under 20 men we had five runners and thought we had  an outside chance of a team medal, however it wasn’t to be with the boys finishing a respectable 5th team. Christian Graham was our top finisher in 14th place closely followed by team mate Magnus Tait in 17th. Next home in 28th place was our new member from Finland Severi Salonen followed by Euan Hood 57th and Daniel Kelly just back from a trip to Canada in 63rd.

Our only under 20 lady was Sarah Tait and she started off strongly, however having had a painful foot this week began to suffer a bit on the second lap as it began to get sore. However Sarah rallied and still finished a creditable 17th.

In the senior women’s race Keira Gore was yet another solo Lasswade athlete. Keira not  feeling 100% this week decided that she was still going to race. Keira started off steady and worked her way through the field to finish 64th. Lasswade athlete Amy Frankland also in the women’s race but running for Edinburgh University had a very good run to finish in 18th place.

The final event of the day was the senior men and Lasswade had five men competing. Martin Gore ran a strong race and was our first finisher in 109th, he was followed by the first of our masters Steve Brown in 403rd, then came Peter Ness in 437th, Dave Scott was a little further back in 464th and Phil Parr-Burnam completed the team in 583rd.

A great days athletics – congratulations to everyone on their own individual performances and to Harry on his win.

Thanks also to our volunteer marshal’s Stuart Meikle and Graham Knipe for their help it is greatly appreciated.

Finally thanks and congratulations to Linden Nicholson on her promotion, very well deserved. Linden has officiated at this event and other cross country events over a number of years.

Officiating and volunteering helps Lasswade AC as it is noted (not literally) how often clubs help/support these events. For it’s size Lasswade do very well as we consistently provide support. Sometimes we forget how important officials and volunteers are but without them these events would just not take place, so thank you all again.