Lasswade’s Track and Field Teams were in action again, at Grangemouth, over both days of the weekend. Saturday afternoon saw the U11s, U13s and U15s in action in the second match of the Forth Valley League season. Sunday was the final match of the lower YDL, with the U13s, U15s and U17s back in action. 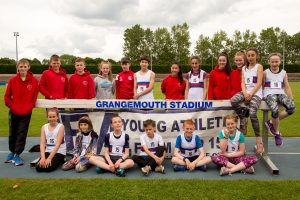 24 athletes turned up to compete for the team on what turned out to be a great day of athletics. The sun was shining, which has been a bit of a rarity so far this season, and with 24 athletes coming along the team had most of the events covered. 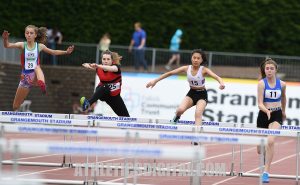 On the day Lasswade finished in sixth place, however individual performances throughout the team were fantastic. Of the 38 events competed in, Lasswade athletes produced a combined total of 13 new personal bests. In addition to that, there were another 12 performances from athletes who were competing in an event for the first time. 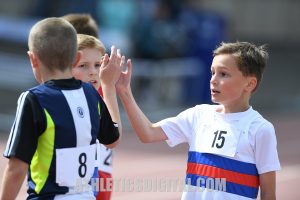 The final match of the Forth Valley Season will take place on Saturday 24th August. We will once again be hoping to get as many athletes out competing for that one.  Results from match 2 can be found using the following link:

Sunday saw the largest team of the season, so far, set off for the final match of the YDL season. A total of 30 Lasswade athletes competed across the U13, U15 and U17 age groups, many of whom had already competed for the FVL team the day before. Once again the weather was kind, although the heat proved tough for the distance runners.

Once again all 30 athletes competed fantastically well and, as a result of having a bigger team to back this up, managed to produce a fifth place finish on the day. Our best of the season in this division. There were still plenty of spaces to fill in the team, so hopefully in the coming months we can continue to get more and more athletes out to compete for the teams.

Off the back of a successful weekend at Scotstoun, for the Superteams, last week it was great for everyone to see so many athletes in action for the teams. The number of personal bests shows the level of improvement and quality of the athletes we have at the club. We are also seeing a number of newer athletes coming forward to compete for the Teams. As shown by the number of results where athletes were competing in an event for the first time.

Congratulations to all involved, and for those who couldn’t make it this time, please try to get along for future matches. The teams really do need every athlete available. Results for the match can be found at the following links:

(please note: one change of name is needed for the boys U15 4 x 100m relay. This will be amended for the final results)

(please note, on the U17 Girls results the names for the 100m & 200m A string have to be switched around. I have been in touch and this will be amended for the final results)

Thanks to Keith Kong and Gary Leek for the photos.